Author Jody Casella tagged me for a blog hop, entitled "The Process," and I'm truly honored to participate.  But just as an aside: Doesn't "blog hop" sound like a term invented by Dr. Seuss?   Blog Hop on Pop. Blog Hop Till You Drop.  Don't Stop the Hop! Not Until You Reach the Top!  Oops... Stomach Took a Flop; Gotta Get the Mop. 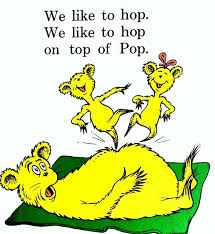 Where was I?  Oh yeah.  I was just about to launch myself into my maiden blog-hop voyage.  But first, I want you to read these exceptionally wise words that Jody Casella posted to her blog a few days ago: http://www.jodycasella.com/2014/05/in-which-i-remind-myself-to-stop.html.  See how cool she is?  I don't believe that all good authors are also fantastic people, but Jody is both.  Her debut YA novel, THIN SPACE, has garnered wonderful reviews, all well-earned, and it's so exciting for me to see the patience of someone like Jody, who's been doggedly plugging away and learning her craft, be rewarded.  I love following Jody's blog, "On the Verge," because she's so honest, interesting, down-to-earth, and funny.
On to the questions!

Truthfully, a more pertinent question for me these days would probably be, "What are you supposed to be working on?"  I haven't so much as looked at my current work-in-progress in a couple of weeks.  This is not good writer behavior, no matter how many valid excuses you might have!  But when I do get my ass back into gear, I will be working on my historical YA novel set in the late 1500's in an area in County Clare, on Ireland's western shore, known as the Burren.  This is what much of the Burren looks like, and has looked like for a thousand years or more:

My story is about an eleven-year-old deaf boy who runs away from his abusive home and wanders through this desolate landscape until eventually he finds his way to Corcomroe Abbey, also known as The Church of St. Mary's of the Fertile Rock:

There, he finds his haven and his place in the world...  until, years later, the British arrive under the leadership of Cromwell to dismantle all the abbeys and drive the "Papists" out of Ireland.

2. How does my work differ from others of its genre?

If the genre we're talking about is historical YA, it seems to me that much of that is set in the relatively recent past - within the last 150 years or so.  A novel set in Ireland over 400 years ago is difficult to write because the vast majority of the population was illiterate at that time, so there are few contemporary writings to refer to to learn about daily life.  On the other hand, because there are so few writings, who's to tell me I'm wrong when I make something up?   There are records of the major historical events, and there are rich stores of legends and folklore,  and aside from those I can pretty much do what I want.

I write about things that grab hold of my imagination and won't let go.  I visited Ireland once about nine years ago with my family.  We spent a day in the Burren, and that rocky moonscape just stayed with me, and eventually I got around to wondering what kind of story might have taken place there a long, long time ago.  I bought a big, detailed map of the Burren and started trying to read anything I could find on the subject, and gradually the story began to take shape.  I don't know where in my mind this particular boy emerged from, but I would say that all of my protagonists are outsiders of one kind or another, probably because that's how I've always perceived myself, and that he is the second of my five to have a physical disability.

4. How does my writing process work?

I usually start by doing a lot of reading.  Some of this is strictly research, and some of it might be fiction, or poetry, or anything else that helps me get a sense of a particular setting or society.  Then at some point, once I have an idea of who the characters might be,  I begin to see scenes enacted in my mind's eye, sort of like a movie.  Once I have several such scenes, which I think of as "chunks," I start to write them down.  I don't worry about the order they go in; I just try to get them down.  Then I start trying to imagine what came before each chunk, and what might follow.  In other words, my process is haphazard and chaotic, but it works for me.  Eventually, I have more chunks than there are gaps between them, and then I start thinking about filling in the gaps and creating a workable structure... you know, chapters and such.  I'm pretty sure most writers don't work this way, and I'm not endorsing or recommending it.  It just works for me, or at least, it works for me better than most other methods I've tried.

That's it for the questions!  And now comes the "hop" part: I've found two writers who have graciously agreed to let me pass them the torch!  They'll answer the same questions I just did, on their own blogs, and then tag other writers, and so on, and we will all ride off into the sunset.

Sylvia Ney is a writer I just "met" during the A to Z Blog Challenge we both completed in April.  She's a freelance writer based in Texas who has published newspaper and magazine articles, including a current series called "Ask the Agent" in Southern Writers magazine, photography, poetry and short stories.  She blogs at http://writinginwonderland.blogspot.com, she tweets at @SylviaNey, and she enjoys teaching and mentoring other writers.  I'm really looking forward to reading her hop!

I "met" Tanita Davis when she left a comment on one of my blog posts.  Tanita and her pals blog at "Finding Wonderland" (yes, I've noticed the Wonderland theme for both Sylvia and Tanita), also known as http://writingya.blogspot.com/.   Tanita has published A LA CARTE (Knopf, 2008),  of which Kirkus Reviews said: "Davis's debut offering is as delightful and fulfilling as the handwritten recipes-in-progress included at the end of each chapter;" MARE'S WAR (Knopf, 2009),  of which the SLJ said: "A steady travelogue, realistic banter, memorable characters, and moments of tension, insight, and understanding make this an appealing selection;" and HAPPY FAMILIES (Knopf, 2012), which Richie's Picks calls "a book of excellent literary quality."  I'm very excited to see Tanita's hop too!

Thank you, Sylvia and Tanita, for taking time out of your busy schedules to come and hop on!!  And have a happy Mothers Day, one and all!

p.s. In case you didn't already think this whole "Process" blog hop is awesome, just look who's in it!  None other than A.S. King! http://www.as-king.info/2014/05/the-groovy-train-interview-thing-as.html.  I'm soarin' with the eagles!!
Posted by Unknown at 7:40 PM