LET ME TELL YOU A STORY.

In 1884 (most of the dates in this story come with the disclaimer "give or take a year"), a girl named Buntze was born in a shtetl inside the Russian pale of settlement. She grew up and married an orphan boy named Shmuel Don. In 1909 they had a daughter whom they named Gittel, and in 1911 they had a son, Avrum. Things were getting difficult in Russia for Jews; there were pogroms and killings, and many Jews were fearful that it was all only going to get worse for them. (They were right.)  At some point shortly before or after Avrum's birth, Shmuel Don set sail for America, where the plan was for him to work and save his money until he could afford to bring over his wife and children. He had relatives in Bangor, Maine, so that was where he headed. He kept his bargain with Buntze, but it took him ten years.
Meanwhile Buntze and the children lived with her parents, and Buntze kept a secret from her husband the whole time they were separated. When Avrum was born, the umbilical cord had gotten wrapped around his neck, and his brain was partially deprived of oxygen. It soon became apparent to Buntze that Avrum was mentally slow, but she never told her husband this for fear that he would abandon his family in Russia. If his son wouldn't be able to study Torah, Buntze probably reasoned, would Shmuel Don think that was worse than having no son at all? So for ten years Buntze wrote letters to her husband in which she invented achievements for Avrum, knowing that if Shmuel Don ever did send for them, he would find out the truth when they arrived, but apparently hoping that by then it would be too late for him to renege.
At long last the summons came from America: working as a scrap collector, Shmuel Don had finally saved enough to pay for passage for his wife and children. But Buntze had one more trick up her sleeve. She announced that she wasn't going to leave Russia without her parents. Was this her plan for a safety net in case Shmuel Don did end up rejecting all of them once they arrived because of Avrum's (Abie's) condition, compounded by her own ten years of lies? In any event, Shmuel Don agreed to continue working until he had enough money saved to buy ship passage for five passengers traveling steerage, which meant being shoehorned into the bottom of the ship for a weeks-long journey.
Buntze had heard about the questions they would be asked at Ellis Island, and about the fact that "feeble-minded" immigrants would not be welcomed. So she tried to teach Abie how to tell the strangers who would be questioning him what his name was, where he was traveling from, that he was nine years old. But this time her luck ran out. Abie could not fool his examiners. The rest of the family was admitted, but Abie was separated from them and detained alone at Ellis Island for weeks. Does this sound like a familiar pattern to anyone?
It's hard to imagine the shock this all would have been to Shmuel Don, but he handled it. He waited with the rest of the family until Abie, the son for whom he had had such scholarly hopes, was released, and then everyone left together for Maine.
Two more daughters were born in Bangor: Rose in 1923 and Sylvia fourteen months later. Within a few years, the family relocated to Scranton, Pennsylvania, a coal mining town in the Pocono Mountains, where they moved into half of a rented duplex and Shmuel Don bought a small grocery store directly across the street.
Funny thing about Rose and Sylvia. Although they looked so much alike that they were often mistaken for twins, Rose grew up believing herself to be unattractive and clumsy, while Sylvia considered herself beautiful, and those self-assessments persisted throughout their lives.

Rose was shy and studious; Sylvia was charming and vivacious. Rose was mortified when she was teased about having an older brother like Abie; Sylvia let it roll off her back.  Buntze's three daughters were (appallingly) categorized as the good one (Gittel, renamed Geraldine in the new country), the smart one (Rose), and the pretty one (Sylvia). Education for girls wasn't a high priority in the family, but somehow Rose mustered the courage to leave the fold, move to New York and attend Hunter College, while Sylvia graduated high school in Scranton and then went to work for a friend of her father's.
When the United States entered World War II, Sylvia had a serious boyfriend who was drafted. They had an understanding that when he came back they would get married, but he never came back. Rose worked as a teacher in New York and Sylvia as a bookkeeper in Scranton, and they both remained single well into their late 20s - perilously late, by the standards of the times.
In 1952 Rose and Sylvia went on a vacation to Florida together, and there Sylvia met Jerry, who was from Brooklyn. Their relationship progressed fast.  At some point Jerry said to Rose, "You should meet my cousin Eddie."  She did.  Eddie turned out to be the quiet, self-effacing counterpart to the brash and boisterous Jerry.  Rose (at age 30!!) and Eddie got married in May 1953 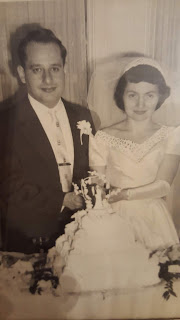 and Sylvia and Jerry married a few months later.
Eddie was the youngest of five siblings, and his father had died shortly before his bar mitzvah.  He and his mother were very close.  She died not long after he and Rose were married, and he fell into a deep depression which required hospitalization.  Rose, who was pregnant with their first child, managed on her own until he was well enough to come home.  Eddie's bouts with major depression proved to be cyclical, and recurred every seven or eight years throughout his life, requiring more hospitalizations.  Each episode seemed to be more severe than the previous ones, and he was repeatedly given electroshock treatments in the hospital.  Psychiatrists struggled to regulate his medication but no regimen seemed to prevent the recurrences.
When he was well, Eddie worked as a social worker.  Jerry started his own construction company. Rose, in New York, and Sylvia, in Scranton, each had two children, close in age: Bobby and Susan for Rose, Jeffrey and David for Sylvia. Sylvia had two more pregnancies after that, both ending in miscarriages.  Rose went back to teaching once both her children were in school, and Sylvia kept the books for Jerry's business.  Both families were Orthodox; they rigorously followed all the rules, ate only kosher food, kept the Sabbath and all the holidays, and sent their children to Jewish parochial schools.
Jerry's business was successful.  He and Sylvia bought a big house in Scranton, lived on the bottom floor and rented out the top floor.  Rose and Eddie had a harder time making ends meet.  Until their children were nine and eight respectively, they all lived in a one-bedroom apartment; the children shared the bedroom and the parents slept in the living room.  It wasn't until Rose and Eddie had been married for over 10 years that they finally upgraded to a larger apartment and got their own bedroom.  The kids had the other bedroom, with a flimsy dividing wall between their two halves.
The two families got together often, always in the house in Scranton, where there was room for guests.  The week of Passover was always spent together, as well as winter vacations and summer visits.  Rose and Eddie didn't have a car, so the family of four would take the subway from Queens to Port Authority and then ride the Trailways bus to Scranton.
The kids grew up and started their own independent lives.  Jeffrey, the oldest of the four, got married and stayed in Scranton to raise his family, working at his father's business and eventually taking it over.  Bobby, the next oldest, obtained a PhD, married young, became a father, and at the age of 23 moved to Jerusalem with his wife and toddler son.  They had four more children there before his wife died of breast cancer at age 49.  He and his children remained in Israel, where he was a university professor, and within two years he remarried.  Susan, his sister, was the only one of the four children who stopped practicing Orthodox Judaism.  She became a lawyer, got married, had a child, got divorced, married again, had a second child, and continued working as a public defender throughout.  David, Jeffrey's younger brother, perpetually struggled to hold a job, but he married a steady and practical woman who kept their growing family afloat financially.
Eddie died of his second heart attack when he was 59.  His wife Rose, three years older, had a three-phase life: 30 premarriage years, 32 years married, and 33 years widowed.  When Eddie died she was only 62.  She left New York and moved back to Scranton to be near her sisters.  She lived alone there until the age of 91, when she moved to Israel to be close to Bobby (now Bob), his second wife, and Rose's Israeli grandchildren, who were now young adults starting families of their own.
Gittel, who was widowed young and raised her two children by herself, lived to be 100, although many of her last years were spent bedridden in a nursing home, so stricken by dementia that she couldn't speak, feed herself, or recognize anyone. Abie, a gentle soul in an always-frail body, lived with his mother until he died at 65. Sylvia, widowed for nearly 20 years, died at 94 this past March after years of dementia, much like Gittel. And Rose - my mother - died on June 1, 2018 at age 95. Despite her recent mental decline, she had been able to live in her own apartment with a full-time aide for the past year. On the last day of her life she kept complaining of being tired and just wanting to sleep. Her blood pressure had dropped and she was brought to the hospital, but before the doctors could decide on a course of treatment, she just closed her eyes and stopped breathing.
My mother and I were never a good fit for each other.  She once told me that I had been "good" until I was five years old.  I've often wondered what a five-year-old could possibly do to permanently remove herself from the "good" category in her mother's eyes.  She always had very specific and rigid criteria for what a daughter of hers should be and do, and I apparently met few of them.
My mother taught me by example to work hard, to live simply, and to care about people who were less fortunate than myself.  I'm grateful to her for all of those lessons.  And although she never supported my striking out on my own and living the life I chose - well, she never would have admitted it, but I suspect she taught me that too.  Thanks, Mom.  Rest in peace. 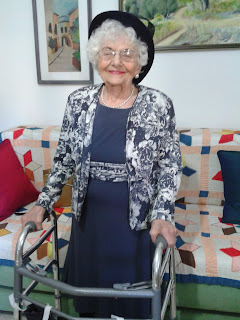